Our first HOT TOPIC is NEVUS MISINFORMATION. Many physicians and nevus support groups misinform people seeking information on giant nevi. This usually happens because of simple ignorance, but not always. Sometimes the misinformation is deliberate, in order to encourage more surgery. Nevus surgery is a huge moneymaker. In a bad economy, that money can be very enticing. Here is a good example of nevus misinformation: One of the (now many--when we started in 1983, there was just one, the Nevus Network!) other nevus support groups recently stated that some nevi lighten in color over time, some darken, and some stay the same. This is technically true, but it misinforms a new nevus parent or a nevus adult. More complete information would be as follows: About 85% of nevi lighten over time, some to the point of being hardly noticeable by age 50 to 60. About 5% darken over time. And about 10% stay about the same in color. But the overwhelming majority go from coal to cocoa over time, based on what we have found in our members since 1983.

See how this is much more informative to a new nevus parent or to a person with a nevus? Better information means better decision-making!


Our second HOT TOPIC is OVERHEATING with a giant nevus.

Most nevus people don't sweat in our nevus skin because the sweat glands are malformed or blocked. And we don't sweat in our scars, because the sweat glands don't form properly in scar tissue. So is overheating a risk? Yes, if we are not heat-acclimated and we’ve cream-puffified ourselves. And no, for most of us, as long as we remain heat-acclimated, then the risk is very low, never zero, of course. That essentially means LIVING AC-FREE! Living AC-free is eco and econo, so it's a win/win situation. Overheating hardly existed in the past, among the older nevus people. It is a recently manufactured problem for the young nevus kids. This was because everyone lived AC-free in the past and therefore everyone was heat-acclimated. The remaining sweat glands that we had worked overtime to cool us, so overheating wasn’t really a problem. AC is quite addicting, and most people will not find it easy to break this addiction. If you do decide to go AC-free, do it gradually, not cold turkey. The easiest way is to start in the spring and never turn the AC on! I’ve lived AC-free in Texas, Florida, Virginia, and several tropical countries, by the way. If you are forced to live in AC at work, you can still heat-acclimate adequately by living AC-free outside of work hours.

I also often work outdoors in the heat doing physical labor. For sun protection, I usually wear a T-shirt, then Army fatigue jacket and pants, socks, either shoes or rubber boots to the knee, a broad-brimmed hat, sunglasses, and thick sturdy work gloves. The Army fatigues are really thick and protect from the sun and from insects and brambles. But they are hot. Really hot….. I run sweat underneath all of that! I stop for drink breaks often, of course, to minimize the risk of heat stroke and heat exhaustion. Since I have a very large bathing trunk nevus, I only sweat on 50% of my body, but that is more than adequate when properly heat-acclimated. Sometimes it works out that I am outside doing physical labor in the sun at high noon and 90 degrees in my Army fatigues! I have worked outside in my Army fatigues at close to 100 degrees, but not for long periods. I would need to put myself through extra heat-conditioning (staying out in the sun longer wearing more clothes while working physically and drinking frequently) to do it safely and comfortably for longer periods of time. Many people need to heat-condition, firefighters being one obvious example. Race car drivers are routinely subjected to 100 plus degree heat also, as race cars don’t have AC, race car engines run red hot, and the driver’s protective suit is like an oven! In any case, one never knows when the electric grid might go down and there is no AC, occasionally for prolonged periods of time, such as Texas or Puerto Rico after hurricanes. Risk factors for heat-related illness include physical deconditioning, dehydration, high levels of exercise intensity, obesity, elevated environmental temperatures, sleep deprivation, certain medications, alcohol and drug abuse, concurrent illness, wearing excess clothing or equipment, and of course having a giant nevus with no functioning sweat glands over a large percentage of one's body! So we nevus people need to be careful and use common sense while we heat-condition, as heat stroke and heat exhaustion can occur and can be fatal. Bottom line, being heat-acclimated is overall a good safety measure for everyone to develop, and especially nevus people, while we enjoy an AC-free lifestyle! 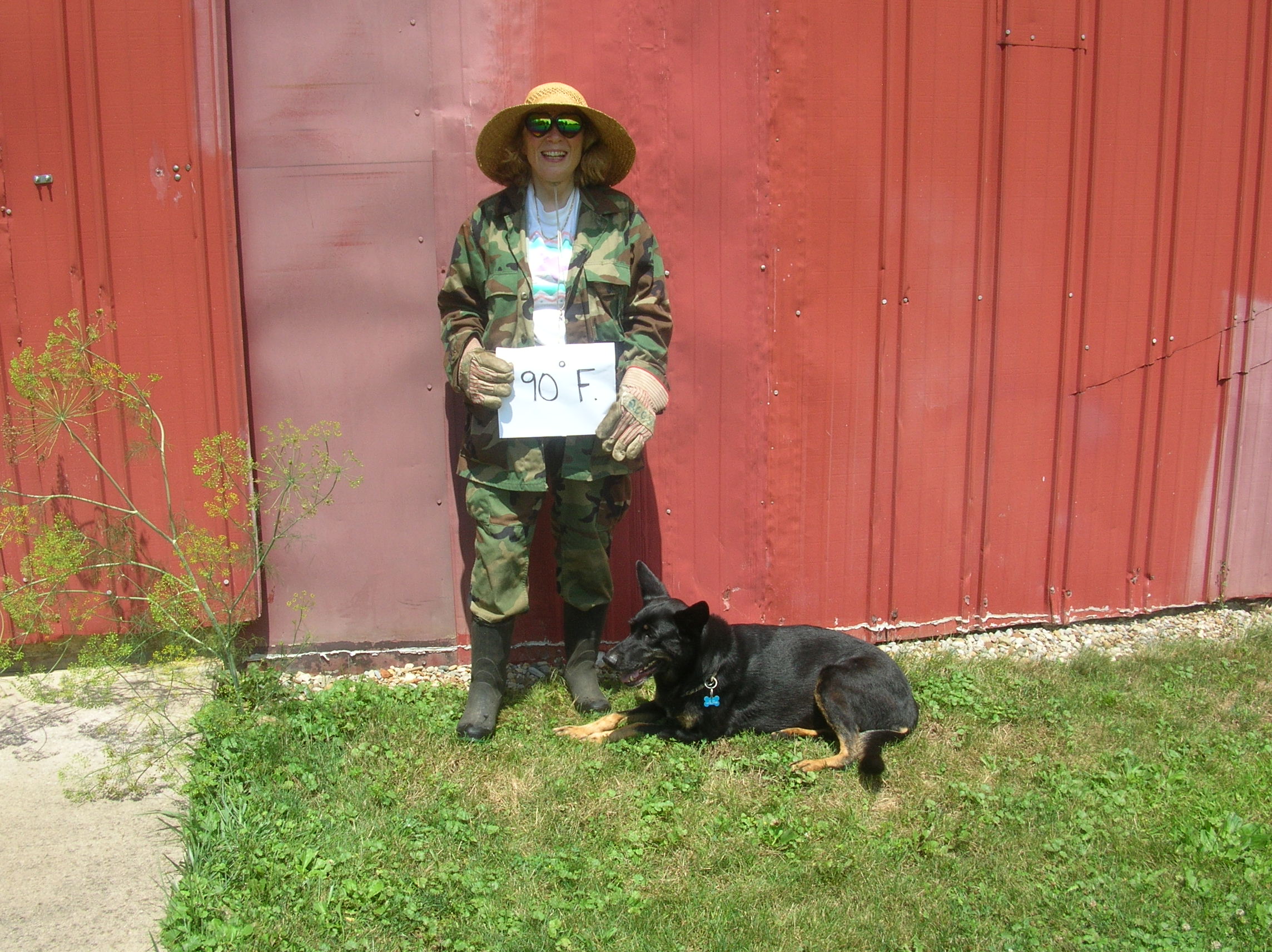 Fun in the sun! Here I am all dressed up in my sun protection clothing ready to work outside in 90 degree heat! I work for about an hour then take a break to get a drink! And the cool shower afterward is just heavenly....

By the way, I still remember how I discovered that nevus people don’t sweat in our nevi…. It was back in 1980 and I was 24 years old—and young and fit. I had just finished a century bike ride—yes, 100 miles in about 14 hours—and I was walking up the steps to the little room I rented as a student. I happened to brush against my bare thigh, which is nevus–covered to the knee and it was bone-dry and burning up hot. Then out of curiosity, I brushed against the side of my lower leg and it was running sweat into my shoe and much cooler! Wow, what a discovery! I remember it vividly. We published it in our info sheet, which, to my knowledge, was the first time that fact was ever published! So being properly heat-acclimated, I'm fairly certain I could handle Death Valley if I had to. I personally think that most other nevus people could even handle the heat of Death Valley as long as they could sweat on at least 20% of their body, especially the head, and were really properly heat-acclimated, and had access to liquids, and used common sense, of course. So if anyone is almost totally nevus-covered and heat-acclimated, let us know what % of sweat glands you have and how much heat you can handle. Takehome point: to nearly eliminate the risk of overheating, I toughened myself up by going AC-free to get and stay heat-acclimated. It’s a good way to uncreampuffify myself! Nevus people need to be tougher than the usual soft, creampuff person anyhow, just to survive all the stuff we have to put up with....


Our Third HOT TOPIC is SUNSCREEN with a giant nevus.

What is the best sunscreen? Staying out of the sun, of course! Except for up to 10 minutes a day for Vitamin D exposure. What is the next best sunscreen? Thick, heavy clothes, like my surplus Army fatigues. You can also go the more expensive route and buy special sun protection clothing, too, of which I have a few items. Do chemical sunscreens work? We don't really know for sure. Some studies say they help somewhat. But they are expensive to buy over a life time, messy to deal with, and a hassle to apply and reapply every hour or two. I almost never use commercial sunscreens anymore for those reasons. I prefer to sweat and heat-acclimate under thick clothes and then peel off the sweaty, hot clothes and jump into the shower afterward. What pleasure! When I go to the beach, I am covered completely, from top to toe in a thick scuba dive skin, booties, hat, and gloves, including a bandana over my lower face, because I have gotten sunburns in that location sitting in the shade wearing a hat from reflected light on a beach. I also often use cotton garden gloves to protect the tops of my hands, and sunglasses, of course. However, I am of a "certain age" that I can easily get away with doing these things. I also cover all up for biking and hiking and just walking about. I use gloves and cover my arms with a thick denim shirt in the car driving, too. I started doing this at age 25 after I first realized the sun risk for those of us with a nevus. It has paid off: I look younger than my friends the same age, who have more sun-damaged skin and wrinkles! How can a younger person handle sun exposure? Do the best one can.... There are still entire schoolyards and swimming pools with nary a bit of shade anywhere..... And it is difficult for younger kids to dramatically "overdress" compared to their peers. there is no one quick, easy solution. Probably a combination of things will be needed, year after year over a lifetime.....

Our fourth HOT TOPIC is Nevus and MRI's.

MRI's are very expensive blurry pictures. They must be done in a special way with special technique to be of any use. Often they are not done right and have to be redone. See the MRI section under Nevus Information for more answers. To really see pigment in the brain, they must ordinarily be done in nevus babies by the age of 3-4 months. After that age, the pigment may be there but may no longer be seen on an MRI. They are expensive and a hassle and come with a slew of possible complications, mainly due to the sedative/anesthetics that are needed so that infants and young children don't move while the pictures are taken. If the nevus kiddies move, everything is blurry. We have had at least 4-5 nevus kids arrest (heart stops) due to complications and allergic reactions from meds for MRI's. Fortunately, no one has died yet from an MRI. Doctors love them and radiologists really love them, because they are a money-maker. We had one nevus member a while back whose child was getting yearly MRI's, all the while without symptoms. Yearly!! OMG, what torture for everyone involved! What stress and hassle! They aren't really needed, especially if the nevus person has no symptoms (headache, neurological problems, vomiting 10-15 times daily for a couple days, etc). Would it be nice to have one as a baseline? OK, maybe. But again, not really essential. For research purposes? Again, OK. Some nevus parents drive themselves totally off the wall with stress and anxiety because the results can change over time: one time abnormal, next normal, next abnormal, etc, etc. In general, in life, and especially with medical treatment, less is more. I've never had an MRI yet and I'm nearing 60 and don't plan on it unless I have symptoms. We nevus people want to feel as "normal" as possible. Usually that means ignoring our nevus most of the time, doing nothing and moving on in life. "Don't do something. Just stand there!" The less we have to confront our nevus, the better. That means the less medical interventions, the better for our psyche. With a nevus, FAGEDABOUTIT is good advice. Bottom line: In our group, probably 80%-90% of the MRI's done serve no real purpose... Good luck deciding!
If you'd like to submit a "hot topic," just send us an e-mail at info@nevusnetwork.org The opinions expressed here are those of the individual writers and do not represent the Nevus Network or the medical community. You must consult your own personal physician for all medical advice.