I am 56 years old and I was born with a rare, wrinkled, puffy torso nevus reaching from the very top of my neck to my buttocks, wrapping around to my upper arms and chest like an opened short-sleeve blouse. My nevus skin looks "thick," but it is actually very thin. I also have over 500 puffy satellites. After my birth, my father must have realized that there was nothing that could be done for me surgically. He always said, "No doctor will ever perform surgery on my daughter." Growing up, though, I desperately wanted to be “fixed.” I was mad at my father for years and naturally blamed him for not "fixing" me while I was a baby and wouldn’t remember it so I could look “normal.” My nevus didn’t stop me from living a “normal” life, though. I have a good job, nice house, got married and have three wonderful, nevus-free daughters and one beautiful, nevus-free granddaughter. After 16 years of marriage, I got divorced due to reasons other than the nevus. I’m single now and I like my freedom. Of course, if “Mr. Right” happened along, well…..

I have always wanted to meet other nevus people who had had surgery to see if I could have looked more normal. I always had the thought that surgery would make you better. Almost 2 years ago, I had the opportunity to meet a group of nevus adults and children, after my daughters found other people with giant nevus for me through the Internet. I was 55 years old before I met anyone else with a giant nevus. I was expecting those who had had surgery to look good enough so that they could expose the surgically-treated skin when they went out. Imagine my disappointment to find that most of the time, they didn’t look any better because the scarring was so bad. And they all still kept the treated areas covered up and hidden. After seeing the terrible scars left after surgery, it really upsets me to think doctors and parents would put a nevus child through all that because most of the time, for those with really huge nevi, they aren't any better after treatment. In fact, some looked worse after treatment than me without any treatment! I remember hearing that with really giant nevi, you either keep the nevus as is or you look like a burn victim. Surgery seems to help those with smaller nevi, but not those with giant ones like mine. One girl with a giant nevus had had surgery on her thighs and was still very self-conscious about showing me her legs, which were severely scarred. She was so embarrassed she pulled her clothes up and down above her knee so fast I barely saw her skin. I could not believe that’s what surgical treatment did to her. If you were proud of your surgery, you would have modeled your thigh showing how great you looked, not hidden it quickly in shame. I was upset looking at those scars thinking I could have gone through all that and not been any better--and maybe worse, with numbness, itching, and irritation. Now that I have seen nevus people who have gone through many surgeries, I realize my father was right. He was a lot wiser than I thought. In the end, he saved me from going through an ordeal that was not going to benefit me at all and for that I give thanks.

The best gift a parent can give a giant nevus child is to teach them to focus on the blessings they have and not on the ones they don’t. We need to learn to concentrate on the things we can do and not on the things we can’t. I can't wear low-necked, short-sleeved tops without getting stared at. I would love to be able to go out wearing a T-shirt, but that is a blessing I will never have. I need to concentrate on the things I can do and not on the things I can't. Building a child to learn to live the way they were born is a far greater gift to give that child than endless surgeries. I had a hard time dealing with my parents’ decision until I saw a lot of giant nevus people and realized how well off I was surgery-free. There are some blessings I donSome things are better off left alone. Some things just cannot be fixed. If surgery is done for cosmetic reasons only, I would advise parents to check out the results of lots of nevus people who have had it done before you subject your child to it. Look the treated nevus people over really well before deciding on surgery.

Even with today's technology, I wouldn't have anything surgically done to me now. If I hadn’t seen people who had had surgery, I would have always wondered if surgery could have helped me. If I had stumbled on a doctor who told me he could help me, I would have jumped for it even at my age of 56. But after seeing all the bad surgical results, now if a doctor told me, "I can fix you," I would tell him, "No, you can't." In fact, after seeing one or two people with truly giant nevi who have had surgery done,and the scarring and what they went through, it should be obvious to anyone that it is impossible to make a giant nevus better most of the time. We can't be fixed. As one of my daughters told me, “Mom, skin is something that can’t be copied yet.”

I made the choice when I was in junior high to have the satellites removed off my knees. I always wore knee length socks and longer skirts and thought if I could "fix" my knees up, then I would look "normal." But the scars on my knees ended up to be no improvement. When I healed up, I was no better afterward. I did have several satellites on my face that I was happy to have removed. They scarred but those scars are better than the original moles I had. So surgery sometimes helps, but not most of the time. Now that I am older and see the results of surgeries that have been done on nevus kids with huge nevi, I just thank my lucky stars that I never had to go through that ordeal. Who could have imagined that my father was right after all. Thanks, Dad! 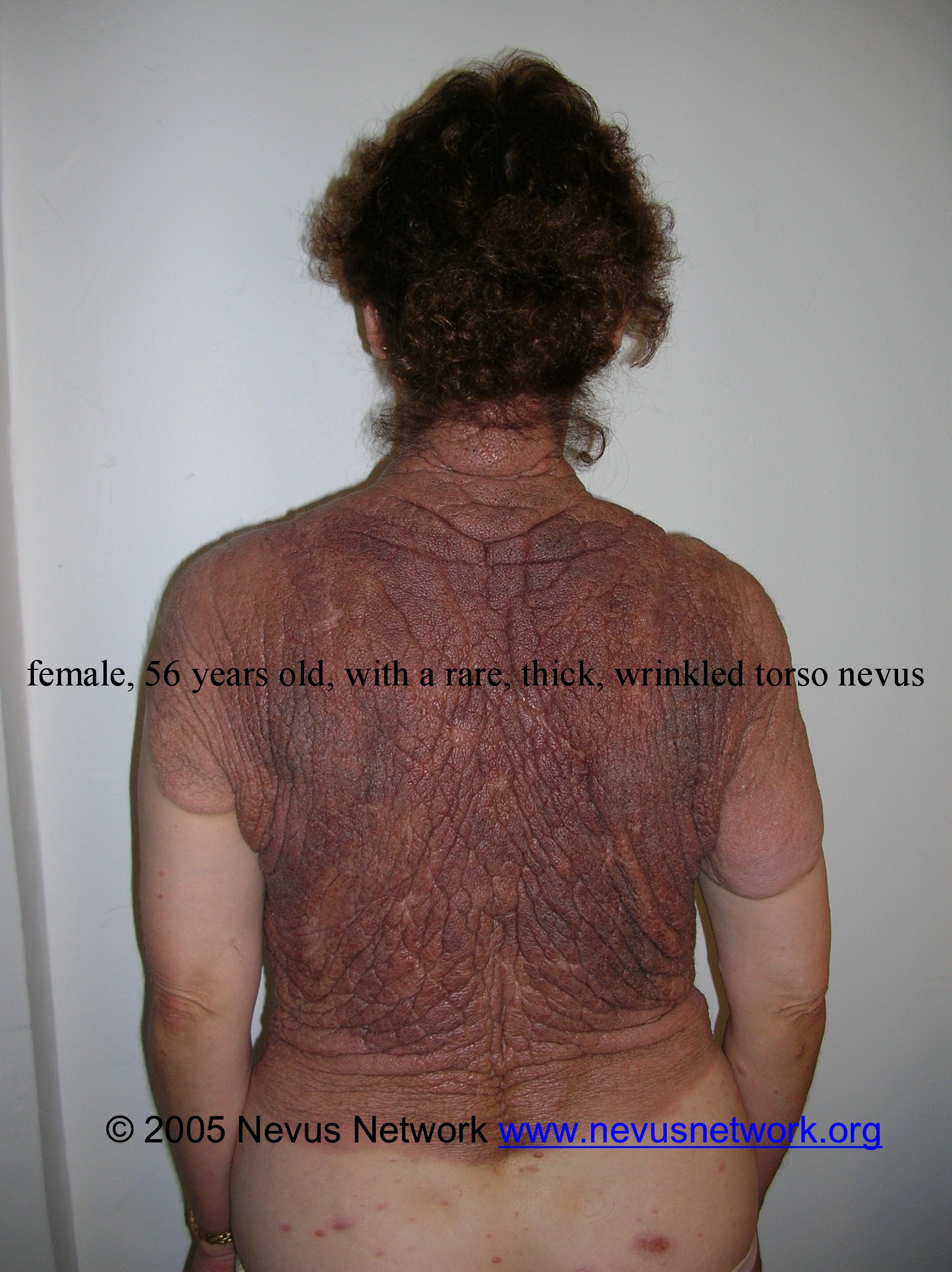 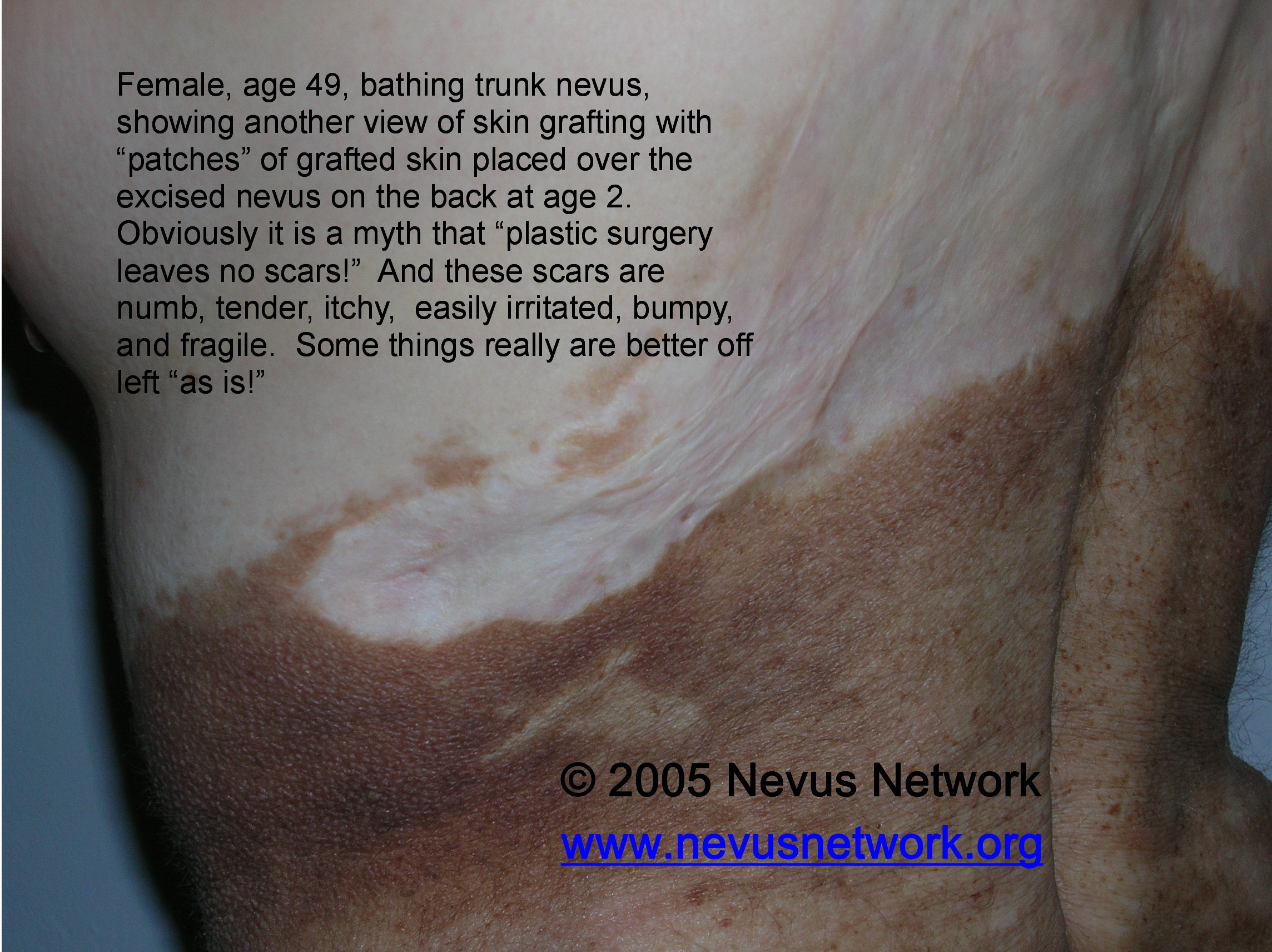